After 36 hours sailing east, the Mauritius Trochetia, a run-down merchant ship loaded beyond usual capacity, reached a scrap of land stranded in the middle of the ocean. Navigation through the narrow canal dug in the huge lagoon took another hour. The coral reef that surrounds the island, a few nautical miles from the shore, is a graveyard for ships that have tried, for various reasons, to land here since the 16th century. For a long time, however, the island was primarily a geographical reference point for sailors, a place to leave the favourable western winds behind and turn north towards India. Portuguese, Dutch, English and French seafarers would come ashore in the hope of replenishing their water supply and enriching their diet with fruit to avoid scurvy. This was no easy feat because, according to early Portuguese illustrations, the beaches were occupied by a population of giant tortoises of the species Cylindraspis Peltastes. The animals were packed so tightly that the first human visitors had to jump over their bodies to reach the island. Portuguese chronicles reveal that these tortoises – like many other island species – were not afraid of people, but friendly and intrigued by their presence. By the end of the 18th century, these giants, like many other endemic species, had disappeared from the island. Unfortunately, it was discovered too late that it was their meat that caused a troublesome skin disease in early settlers. 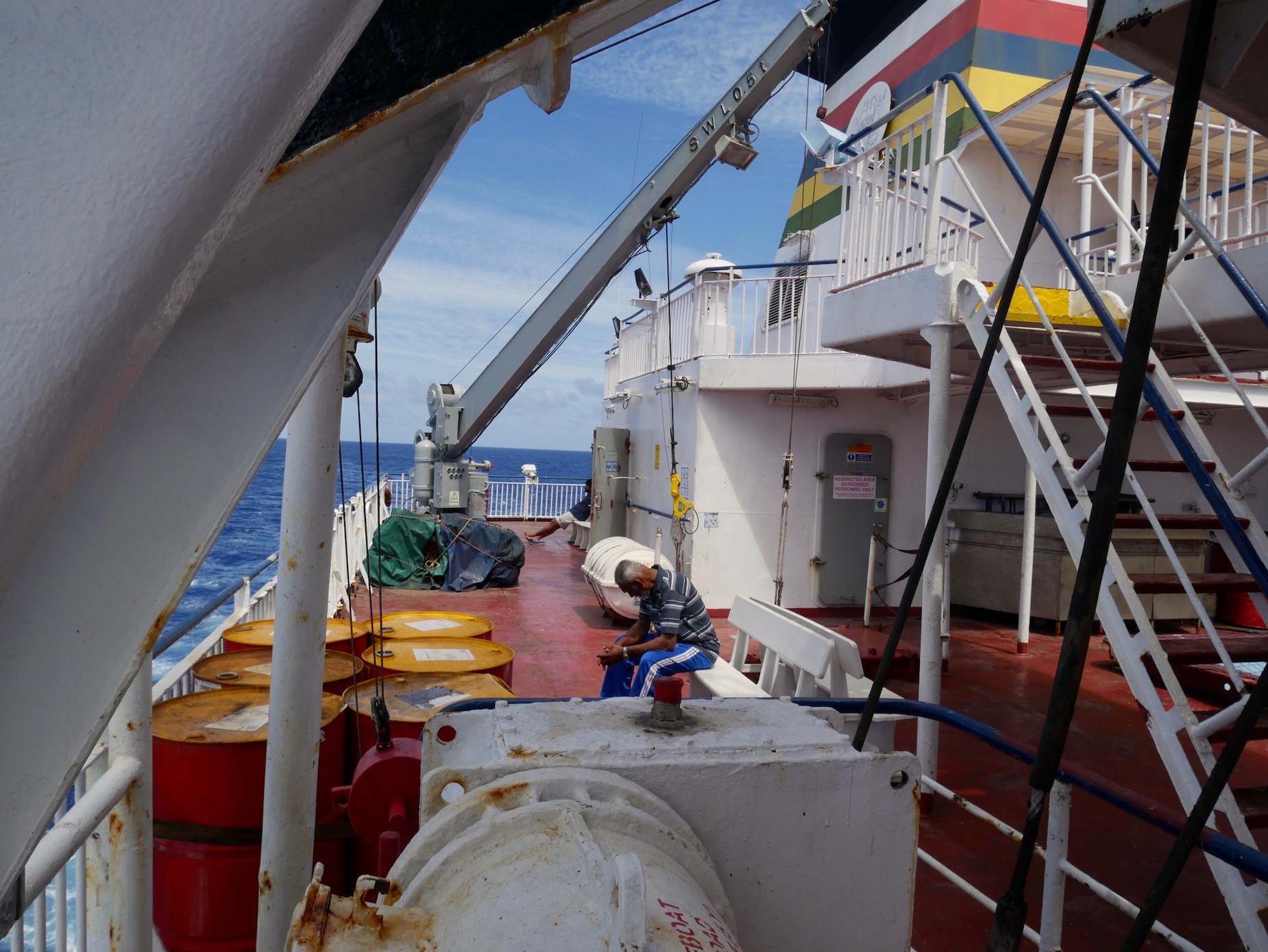 The more advanced colonisation of the island was associated with the French dominance in the Mascarenes. Like the Seychelles and the Chagos Islands – water poor and many days away by sea – the small Île de Rodrigues was not suitable for large-scale sugar cane cultivation and served the French colonists as a source of food supplies. At the height of colonial prosperity, sugar prices were so high that it was not profitable to produce other foods on the centrally located Île de France (now Mauritius) and Île Bourbon (Reunion), and sugar cane plantations quickly consumed all available arable land. To meet the European demand for sugar, hundreds of thousands of people on the Swahili coast in Africa were kidnapped, sold and forced into slave labour. There was no clan or family north of the Zambezi Valley that was not affected by this practice. A small part of this population ended up on Île de Rodrigues, which to some extent – bearing in mind everything that went on – could be considered a stroke of luck. The island’s population increased significantly after the abolishment of slavery, when the African diaspora of Île de France and Île Bourbon, the islands which had been transformed into plantations, found themselves in an even worse situation. The only chance of survival for many former slaves was another migration. You can read more about these events in the next story about the music from the Indian Ocean that soothes tourists’ ears nowadays.

As well as making fortunes for Europeans, capitalism powered by slave labour produced completely new societies on the islands of the Indian Ocean. This is a story very similar to the well-documented colonisation of the ‘New World’. As in the Caribbean, the African diaspora in the Indian Ocean basin quickly reached an unprecedented size. Because the slaves came from various regions of East Africa and Madagascar and were usually separated from their families before transportation, they were unable to maintain cultural continuity. Their reference points became uncertain and they had to adopt a new creole identity when they reached their destination. Healing methods, possession cults and music committed to memory became their survival tools. The inescapable situation and difficult conditions provided an incredible boost to human creativity and, very quickly, several varieties of creole language and various forms of musical culture called ‘sega’ evolved. 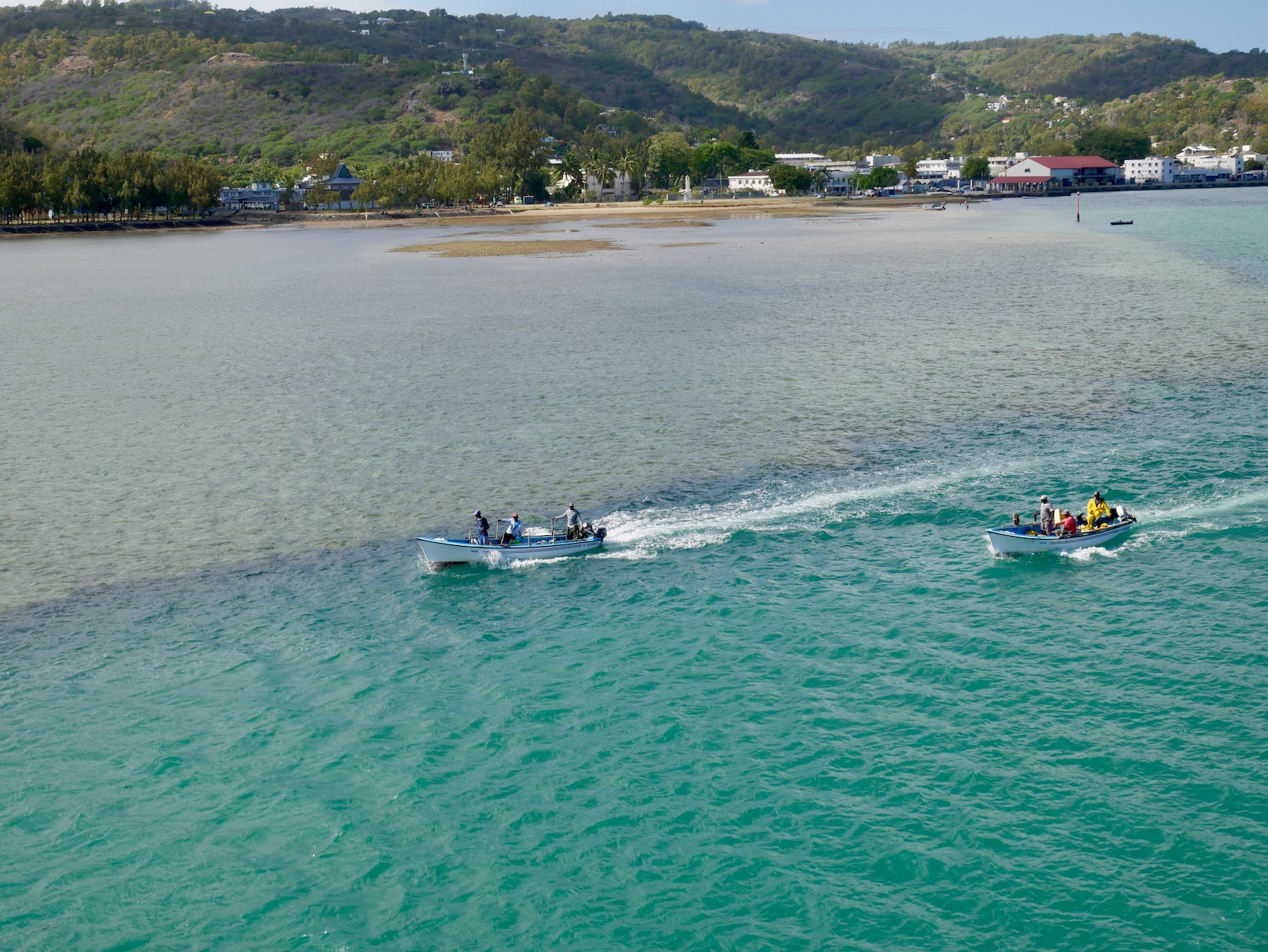 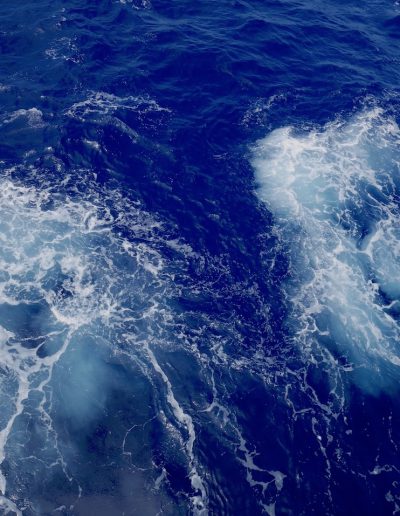 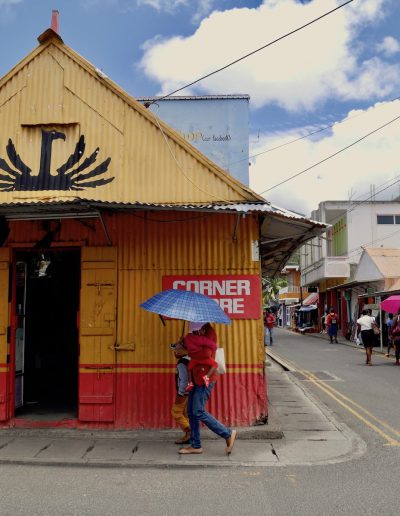 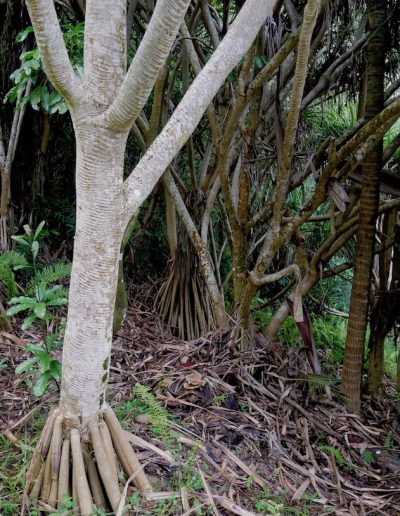 Isolated in the middle of the ocean, Rodrigues is the place where Sega Tambour was created. This is by far the fastest music style played by the African diaspora in this part of the world. Frenetic rhythms pounded on the local version of the tambour frame drum, clapped on wooden mayos, and played on the triyang (triangle) and tin (tuna cans with notches cut into them), complement the short, dynamic vocal phrases.

This is a completely different kind of experience from the Sega Tipik played on the islands of Mauritius, Chagos and Agaléga. There is no rattle of idiophones and – apart from the frame drum – all the instruments are homemade. The tambour is uniquely equipped here with three sets of cymbals, which substitute for the ‘rattle’ of the idiophones. The only person who still makes this instrument is Louis Saint-Ange Philippe, who goes by the nickname Thiong. We were able to talk to him about the drum production process and the history of music on Rodrigues.

To meet the European demand for sugar, hundreds of thousands of people on the Swahili coast in Africa were kidnapped, sold and forced into slave labour.

Sega Tambour combines Afro-Malagasy rhythms, vocal improvisation and old European dance forms. In opposition to the church and colonial authorities, Saturday parties called bal used to be organised in homes and gardens hidden among the tropical vegetation. Despite the difficulties, personal invitations were distributed every Saturday. Each major village had its own bal, which usually lasted until dawn. The rhythms echoed through the hills of the interior, disturbing the colonial officials, clergy and plantation owners living along the coast. It is worth noting that Rodrigues is about twenty kilometres long and only about seven kilometres wide, and the local geography means that you can often hear events taking place on the other side of the island. The ecstatic rhythms provoked people to dance and became a vehicle for something completely unique. The local variety of sega is characterised by improvised word duels that help resolve personal conflicts. In a manner akin to rap battles, these duels enable people to face their adversary and sing their grievances to them, transforming conflict into art. The events also served as an uncensored medium – the excited crowd came to hear a review of the week’s events transmitted in the form of songs. The bal was a space of freedom and respite, a break from the stratification and elitism of the colonial social structure, a place where human dignity could be regained.

The art of vocal improvisation was open to everyone, regardless of age, gender or status. Often, these performances revealed outstanding talents to whom others would entrust their joys and sorrows to be sung. They were usually women, known as marechal, and their specialty was (and still is) to encapsulate complex topics in short poetic forms. Over time, the marechal began to compose songs and play concerts with their groups all over the island. One of the first well known singers was Julie Collet, born in 1939 in Rivière Banane in the south of the island. Also known as Tann Grofi, she founded the first formal group L’Oiseau Tetu, thanks to which Sega Tambour also became known in Mauritius and Reunion in the late 1970s. Her famous composition “Dibwa Trwa Fey” is a story about malaria and its traditional treatment method. Despite the heavy rainfall caused by the cyclone passing nearby, we were able to record an energetic version of the song performed by the group Étoile Rouge, which is continuing the tradition of Julie Collet in Rivière Banane. The beautiful vocal harmonies were sung by Rosie Volkort and Tonia Dartagnan, a mother and daughter whose beautiful connection can be heard in the recording.

Rodrigues is a small island – people know each other here. Reaching the musicians involved a pleasant trip by moped through the green, banana-covered hills. I left my moped in the middle of the pastures and followed a narrow path up the hill. On my way to meet Jacqueline “Maryanne” Allas – one of the music legends of the Indian Ocean – I passed gardens and simple tin houses scattered across the mountainside. I don’t know what language we used to arrange the session. I only speak a couple of words of French, and the local creole has little in common with that language anyway. But there was something in the air that allowed us not only to make the recordings, but to instantly become friends as well. I’m not sure if it was Jacqueline’s unpretentiousness, her grace, or her love for the music.

The local variety of sega is characterised by improvised word duels that help resolve personal conflicts.

With a great deal of help from the inhabitants, over a few weeks on Rodrigues we were able to record all the key people currently associated with this music culture. Our recording sessions and long, interesting conversations with Lorenza Gaspard and her family took place in a lush garden behind their house, among mango trees, passion flowers and banana leaves, with domestic fowl running around. The parties described above took place in that same garden, the population of the surrounding hills flocking there along the narrow paths. In contrast with Lorenza’s frantic rhythms and hypnotic compositions, the self-sufficiency, the slow pace and simplicity of life here astonished me. 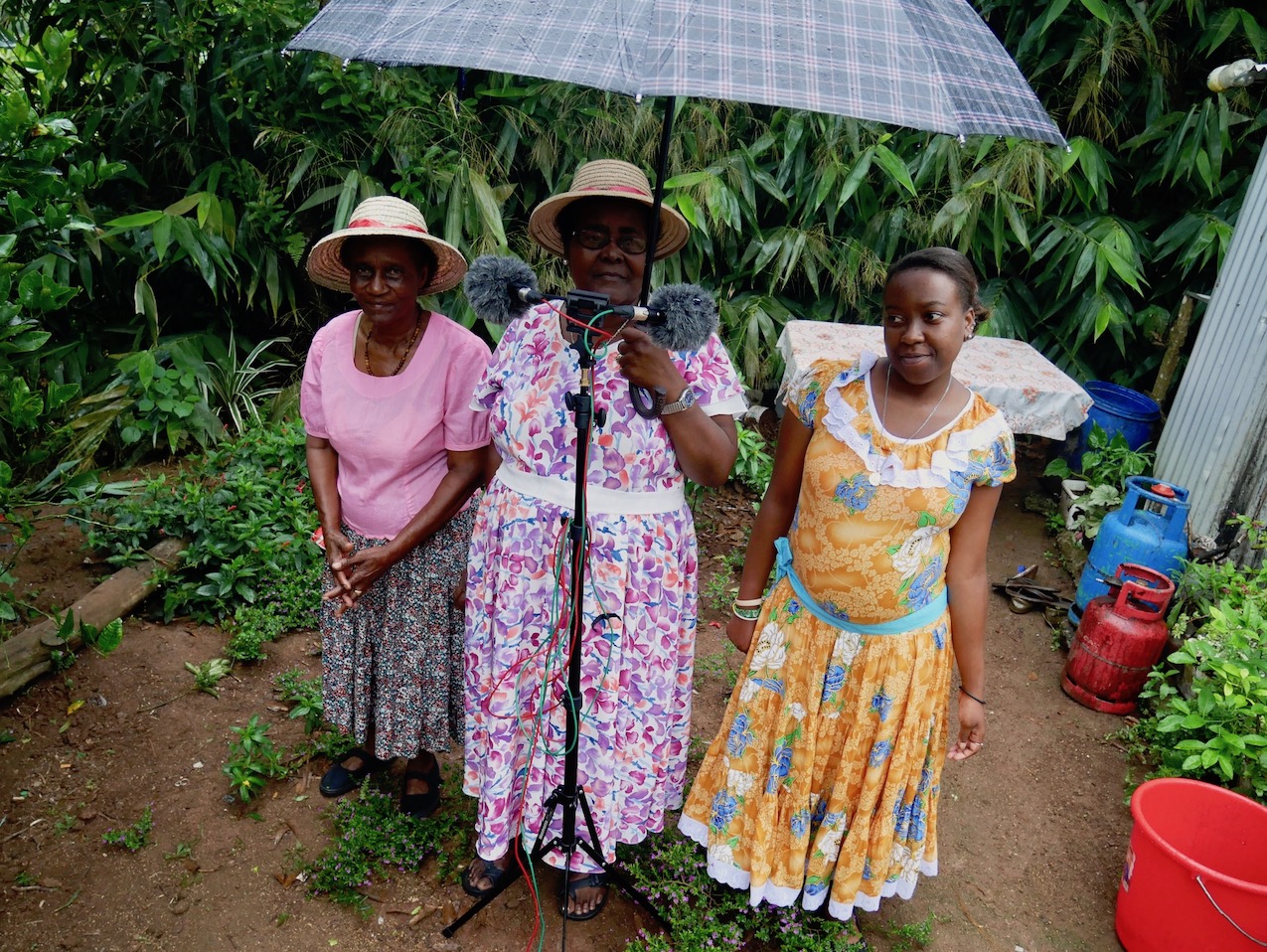 Stafford Samoisy is the only man on the island currently recognised as a marechal. I have heard many groups performing Stafford’s work, but his dynamic, vigorous style is impossible to duplicate. Breaking the ice took some time – a test of the authenticity and transparency of our intentions. The series of sessions at Stafford’s home was one of the most fruitful and inspirational experiences from our time on the Mascarenes.

Heavy rain meant that we were forced to record indoors, so we transformed Stafford’s small living room, tightly packed with people, into an improvised recording studio. The soft blankets on the walls and under the ceiling depicting galloping horses, and the portraits of yet more horses painted in bright colours, created such an absurd backdrop for the musicians that we had to repeat the recordings several times because it was hard to keep from laughing. 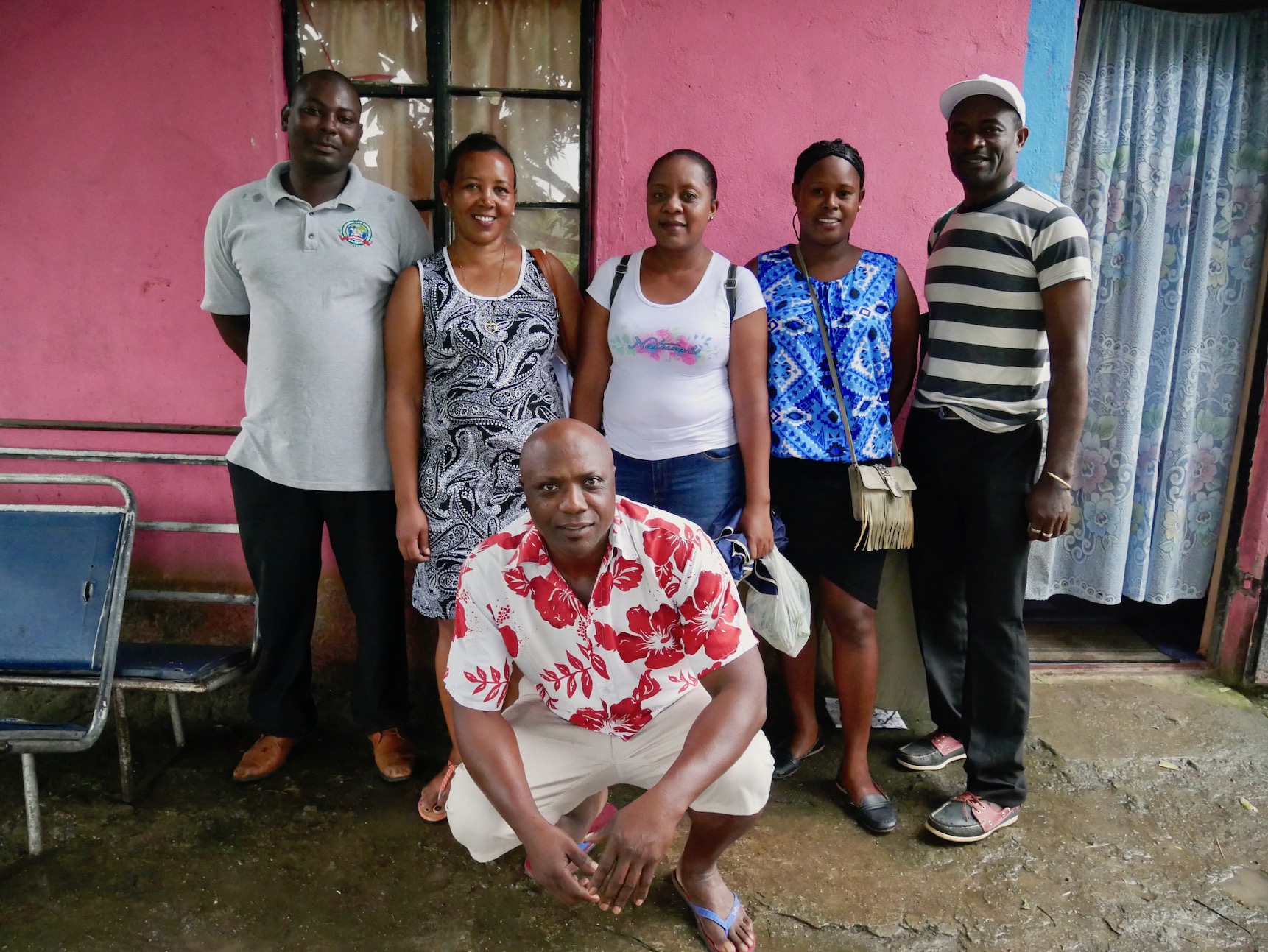 Sega Tambour is at a slightly different stage in its development to the Sega Tipik played on the other islands. The Saturday parties have been replaced by music clubs. I only met one marechal from the younger generation. However, as a phenomenon, it has recently been included on the UNESCO List of Intangible Cultural Heritage, which has led to specific actions being taken to give it a new form appropriate to the times. The collected recordings of the Sega Tambour “All Stars” can be found on the compilation THE BLUES OF THE INDIAN OCEAN, which will be released soon.

We left Rodrigues after almost three weeks on a return voyage aboard the Mauritius Trochetia. Behind us, Port Mathurin – the capital city consisting of seven streets, whose friendly residents only know about traffic jams, haste and crime from watching TV. The hills above the city are covered with a network of paths leading to the small houses where the islanders lead their modest lives. The whole island resembles community allotments. A visit to the market located next to the bus station in Port Mathurin reveals the richness of this place. Despite seasonal water deficits, the abundance of fragrant vegetables, herbs, fruits, grains, and fish caught early in the morning is impressive. Equally inspiring is the knowledge that the goods have travelled less than ten kilometres to reach the market, and that the use of plastic bags is officially banned across the island.

Translated from Polish by Kate Webster. 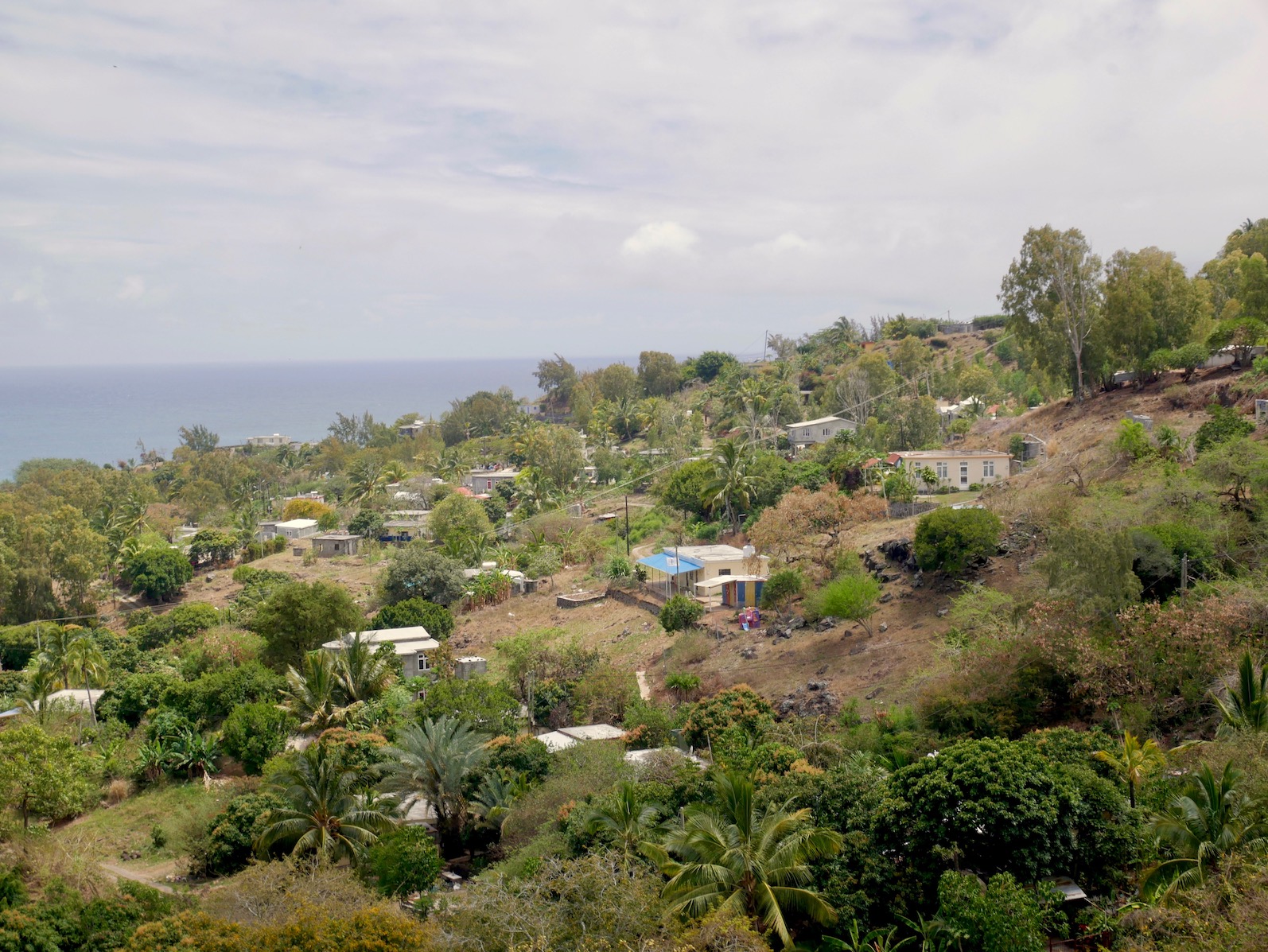